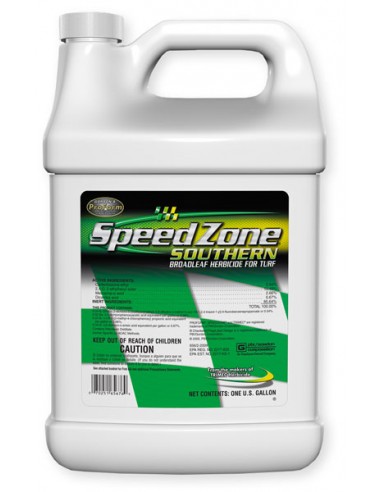 SpeedZone Southern Broadleaf Herbicide for Turf contains an advanced chemistry for broadleaf weed control in turf. The mode of action inhibits a key enzyme in chlorophyll production. This causes cell membranes to rupture and rapidly disintegrate within hours. Weed death can occur within 7 to 14 days.

SpeedZone Southern Broadleaf Herbicide for Turf opens up more application opporunites than most herbicide products. This product excels by controlling some of the toughest weeds. Rain-fast in as little as three hours, there is less concern about weather interference. With SpeedZone Southern you can reseed in one week. A low-odor formulation, SpeedZone Southern can be applied without raising unnecessary concerns over pesticide applications.

SpeedZone Southern Broadleaf Herbicide for Turf Uses/Applications:
SpeedZone Southern is an emulsifiable concentrate or an ester formulation intended for dilution with water. In certain applications, liquid fertilizer may replace part of the water as a diluent.

Mixing with Water: Add ½ the required amount of water to the apray tank, then add SpeedZone Southern slowly with agitation, and complete filling the tank with water. To prevent separation of the emulsion, mix thoroughly and continue agitation while spraying.

Mixing with liquid fertilizers: Use suitable sources and rates of fertilizer based upon local recommendations. Refer to the mixing directions on the labels of the liquid fertilizers (e.g UAN or urea solutions). Always perform a jar compatibility test before large scale mixing.

SpeedZone Southern is a solvent based emulsifiable concentrate designed for rapid penetration and uptake. Adjuvant(s) mixed with this product are seldom synergistic, often antagonistic, and may have no significant influence on efficacy.

Certain adjuvants combined with this product can damage the leaf tissue of turfgrass. If any discoloration or cosmetic effects are objectionable or any level of phytotoxicity would be acceptable, then adjuvant(s) combined with SpeedZone Southern would not be recommended. Use these adjuvants, spray additives or tank-mix combinations, only when your experience indicates that the tank mixture will not result in objectionable turf injury. 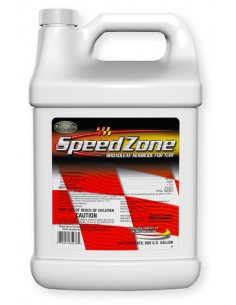