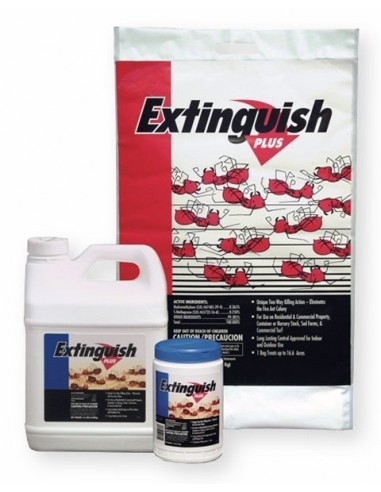 Extinguish® Plus Fire Ant Control is highly attractive to imported and native fire ants and other ants. Worker ants carry the bait into the mound as food for the colony. The ants will then begin feeding the bait to the rest of the colony. They eat it and feed it to the queen.

Extinguish® Plus Fire Ant Control is a unique product containing a slow acting insecticide and an Insect Growth Regulator (IGR). This two-way action ensures complete control of fire ants. The IGR prevents rebound of the colony, while the insecticide insures rapid demise of the colony. Extinguish® Plus will start to kill ants after they feed on the bait. The colony will begin to decline in about a week, after the bait has been brought back to the mound. The mound is destroyed when the queen dies.

Extinguish® Plus Fire Ant Control Features:
* Includes killing speed of an adulticide and long-lasting control of an IGR
* Fast-acting
* Controls and eliminates colonies without colony relocation
* Approved for indoor and outdoor use
* Starts killing immediately after ingestion
* Destroys visible and hidden colonies
* Stops young colonies from developing into problem colonies
* Can be used as a broadcast application or used to treat individual mounds!

Extinguish® Plus Fire Ant Control Uses/Applications:
Outdoor Use: Extinguish® Plus controls imported and native fire ants and other ants, such as harvester ants, bigheaded ants, and Argentine ants. Extinguish® Plus is for use on lawns, landscaped areas, golf courses, and other non-cropland areas such as airports, roadsides, cemeteries, commercial grounds, parks, kennels, school grounds, picnic grounds, athletic fields, campgrounds, and other recreational areas, as well as on grounds surrounding poultry houses (excluding runs and ranges), or corrals and other animal holding areas. Avoid direct exposure of animals to Extinguish® Plus. Do not graze or feed treated lawn or sod clippings to livestock. Apply when ants are active and foraging (when soil temperature is greater than 60º F). To determine if ants are foraging (feeding), place a potato chip near the mound and observe if ants begin feeding. Do not apply product if ants do not feed within a few minutes. Repeat observation at a later time to evaluate if ants are feeding. Apply product when feeding occurs on the potato chip. Repeat applications as needed.

Refillable Bait Station: Use Extinguish® Plus in refillable bait stations. Place up to 1 ounce (2 tablespoons) of Extinguish® Plus per refillable bait station. Locate stations along the perimeter of a structure or fence line with 1 station every 15 to 30 linear feet. Locate stations near potential pest entry points of a structure or near locations where pests are a problem. Examples include: weep holes, foundation vents, stairs, decks, patios, picnic areas, utility areas, and other areas frequented by pests. Inspect stations frequently and replenish bait if soiled or wet. Affix a sticker to each station indicating the contents of the station following filling.

Indoor Use: Extinguish® Plus controls imported and native fire ants, as well as other ants, such as: harvester, bigheaded, and Argentine ants. Use Extinguish® Plus in homes, residential, commercial and other structures, and in the non-food/feed areas of institutional, warehousing, and commercial establishments, such as groceries and supermarkets, hotels and motels, hospitals and nursing homes, schools, laboratories, computer facilities, food storage areas, sewers, transportation equipment, pet shops or zoos, and in the inedible product areas of meat or poultry plants. Non-food/feed areas are areas such as garbage rooms, lavatories, floor drains (to sewers), entries and vestibules, offices, locker rooms, machine rooms, boiler rooms, garages, mop closets and storage (after canning or bottling). In the home, cover all food processing surfaces and utensils during treatment or wash thoroughly before use. Cover or remove exposed food. Using a duster or similar equipment, apply bait ONLY into cracks and crevices, or other inaccessible areas such as, but not limited to, structural voids, unfinished attics or crawl spaces. Apply 0.25 - 0.5 ounce (2 teaspoons – 1 tablespoon) per crack, crevice, or other inacessible areas where ants are entering the structure or where ants are nesting. Apply evenly in unfinished attics and crawl spaces at a rate of 0.25 ounce (2 teaspoons) per 100 square feet only if the space is secured or otherwise inaccessible to children or pets. 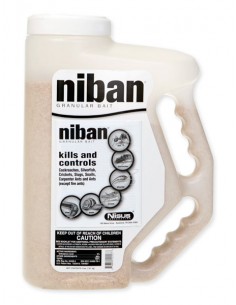 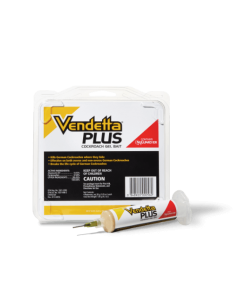 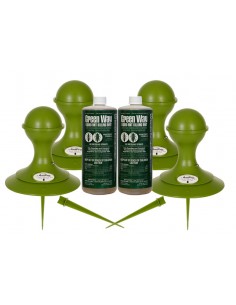 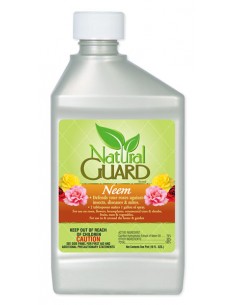 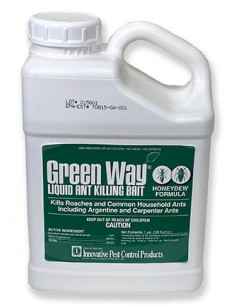