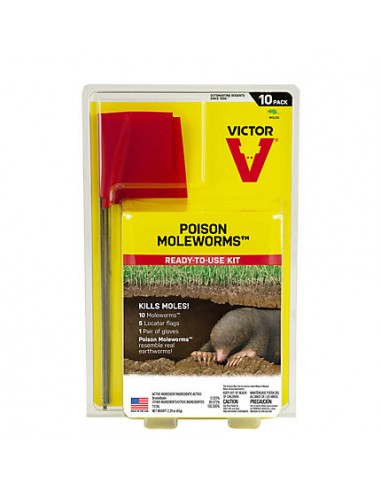 About Moles:Moles eat earthworms as part of their diet. Moles are small burrowing animals, approximately 6 to 8 inches long and typically weigh 3 to 5 ounces. They have short, velvety fur that is usually gray to silvery-gray. They have greatly enlarged, webbed front feet with short claws, the eastern mole (the most common) has a pointed snout. Moles do not have eyes and their ears are very small, concealed in fur. An adult mole may live for about 2 to 3 years.Regionally, moles are found primarily east of the Rocky Mountains. Moles are not rodents; they belong to the group of mammals know as insectivores. They are destructive lawn and garden pests creating mounds and runways which results in disfiguring and sometimes uprooting plant life. Feeding mostly on earthworms, grubs and other small soil insects; moles live their entire lives beneath the surface of the ground. Moles prefer cool, moist, loose soil populated by worms, grubs and other small insects. A tremendous amount of energy is expanded in plowing through soil, requiring a correspondingly large amount of energy. Moles obtain this energy by eating 70% to 100% of their body weight each day. Because of this required food intake, moles can cover a very large amount of ground area.Moles are active day and night year round; however they are most active in the spring and fall on damp days following rain showers. Generally, moles will create surface tunnels or ridges in the top 6 to 12 inches of the ground; this contains the largest food supply. In colder temperatures, during the winter or dry periods in the summer months, moles burrow deeper into the soil in search of food. Daily peak activity may range all through the morning hours, although moles can be seen burrowing off and on throughout the day and night.The mounds of a mole are characterized as volcano-shaped hills of dirt or soil. These hills may average between 2 and 24 inches tall. Runways or surface ridges are created by moles as they are actively searching for food. Often times these active runways will become abandoned after digging in search of food. Prior to treatment, it is important to determine which runways are active. This may be accomplished by either pressing down on a small section of the tunnel or poking small holes into the runways. Mark these sections and recheck in 24 hours. The runway is considered active if the flattened area has been repaired or if the small poked holes have been closed. Moles might feast on Victor's Poison Mole Worms realistic looking earthworms, but it will be their last meal! Victor's Poison Mole Worms Features:* Poison Moleworms are designed for use in underground tunnels* Bait is formulated to be palatable to moles* Poison Moleworms look and feel like real earthworms, a main food source for moles* More effective and less expensive than similar professional type products* Includes 5 active tunnel locator flags Victor's Poison Mole Worms Uses / Applications:Apply 1-2 Victor's Poison Mole Worms in each active tunnelSee product label for additional application rates and treatment instructionsVictor's Poison Mole Worms Target Pests:MolesVictor's Poison Mole Worms Active Ingredient:Bromethalin.................................0.025%NOT FOR SALE TO: NY 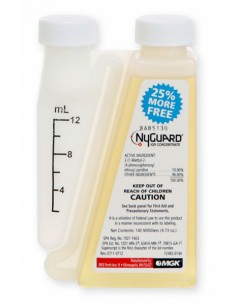 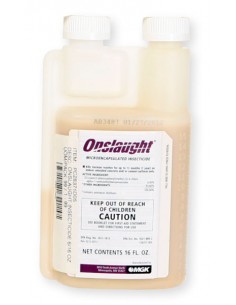 749573
Trustpilot
$59.95
Onslaught Microencapsulated Insecticide Not for sale To: NY, SC 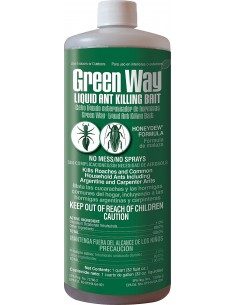